The Lone Ranger...  The best laid plans to ride with others - seem to go astray...  There were plans made to ride with two friends, but they were coming up together & the truck that had the job - had an issue...  So - since I was already on my way - drove on up to Victoria.  The fog was THICK!  Actually glad that my friends didn't make the drive, as it would have been disappointing - if they'd expected to see the views.
Bet you're surprised to see these!  They must be a "new" kind of horse trailer!  They were parked in the horse trailer parking, which is what the yellow sign that they're parked by - says...  The ONLY place I know of where there is actually designated "Horse Trailer" parking & these cars take up two spots, then - another was parked at the far end.  As I was getting ready to leave, yet another car pulled in.  I said;  "Don't park there!"  They said;  "Where are we to park then?"  I replied;  "Just as the signs say, along the edge of the road!"  Unreal...  Are they blind, dumb or just really stupid?

Since the tree farm has been open for people to come up & cut wood, the beer cans are starting to outnumber the trees!  The mud on the logging roads is getting worse than any mud that the horses might make on the closed trails...
On the trail to the Monument we were shocked to find that the far side of the trail had been clear-cut!  In the fog & with the change of landscape - it was almost easy to forget that I was actually on a trail that I know well...
I did see a lot of hoof prints, so someone has been doing some riding.  No trail clearing though, because the climb to the top was blocked with a fresh downfall.  The temperature was in the mid-40's, but with the fog it felt much colder.

Was happy that Farah is back to acting like herself & not a crazy horse!  She was perfect, great trot, nice canter & we had fun.  I feel very lucky to have a mare that is as happy out on her own as she is with a group.  Have got to get Linda back in the saddle!

Labels: Riding at Victoria, Riding in the Fog, Victoria Trails

You cannot remain unmoved by the gentleness and conformation of a well-bred and well-trained horse -- more than a thousand pounds of big-boned, well-muscled animal, slick of coat & sweet of smell, obedient and mannerly, and yet forever a menace with it's innocent power and ineradicable inclination to seek refuge in flight, and always a burden with its need to be fed, wormed, and shod, with its liability to cuts and infections, to laming and heaves. But when it greets you with a nicker, nuzzles your chest, and regards you with a large and liquid eye, the question of where you want to be and what you want to do had been answered.

Back Country Horsemen of Washington

Visit us at our new Home In Iowa~

I enjoy riding whenever & wherever I can, then blogging about it!
Time with our grand-kids tops my list - the gift of old age!
Of course anything about horses, Photography, the Great Outdoors, never-ending work of keeping up a woodland garden & Washington Native Plant promotion are a few of my personal interests. 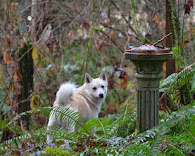